Today marks the 10th anniversary of first visit to Thailand (soon after and as a direct consequence  of coming out https://christianpfc.blogspot.com/2019/07/10th-anniversary-of-coming-out.html).

That was my first holiday alone (after trips with my parents in my teens), after 8 years of only studying/working (with home visits, but not going anywhere alone). After that, many more trips to Thailand and elsewhere in SEAsia would follow.

I figured out everything alone (others prefer to hire guides or ask a lot of questions on the forums), and learnt the Thai language and am currently learning Chinese.

Those trips did widen my horizon considerably, which was not without low points. Just for starters, it was unimaginable that someone would be late, or miss an appointment completely. I had a lot to learn! 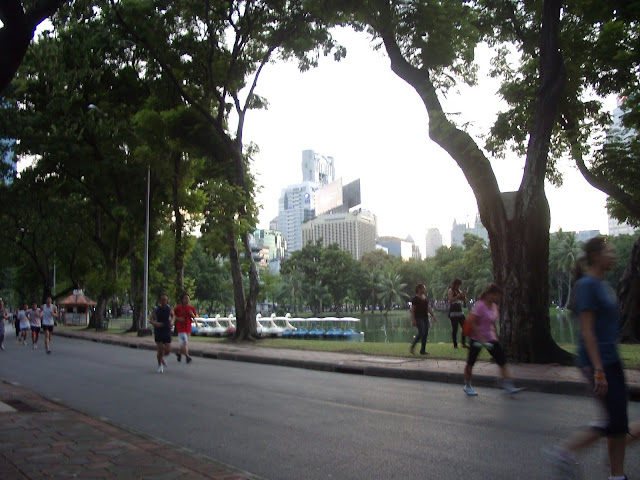 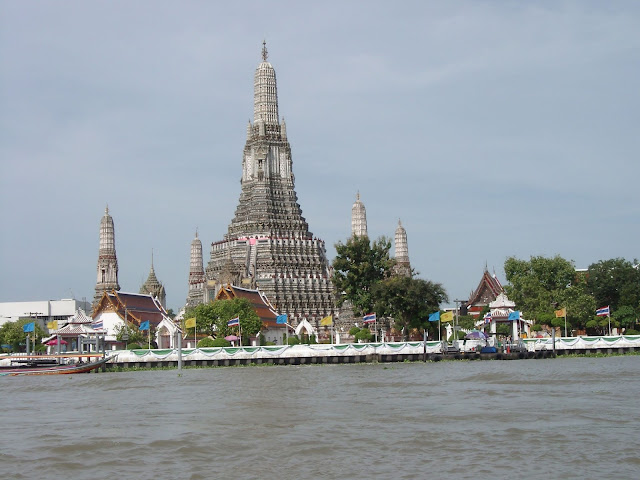 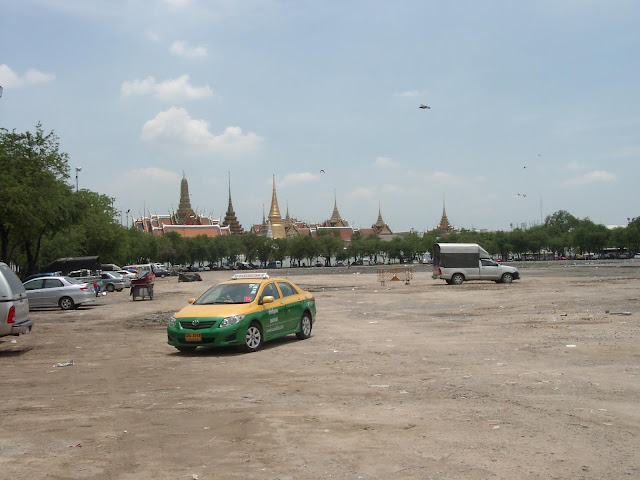 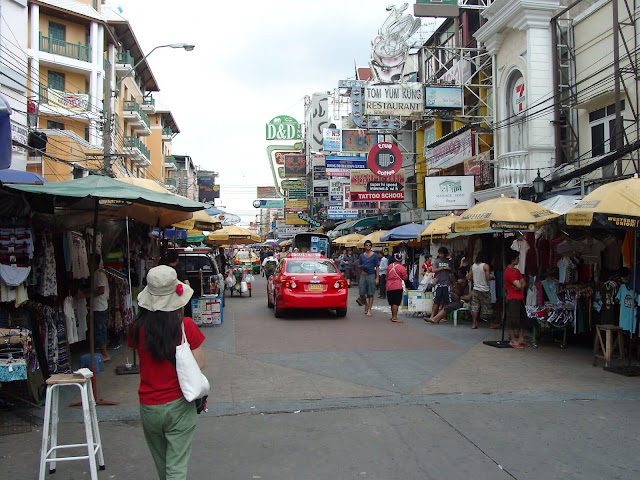 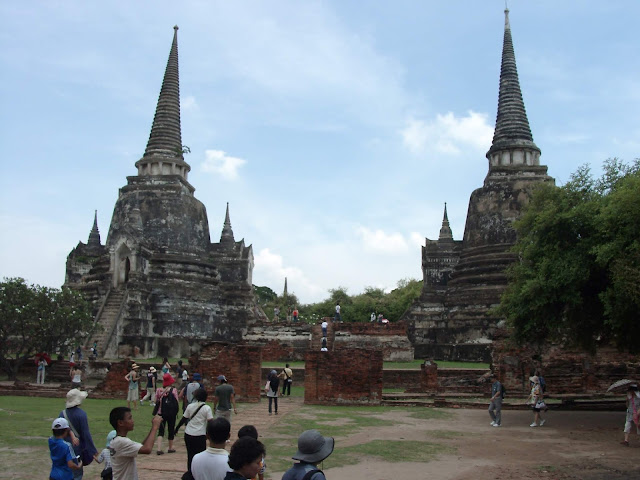 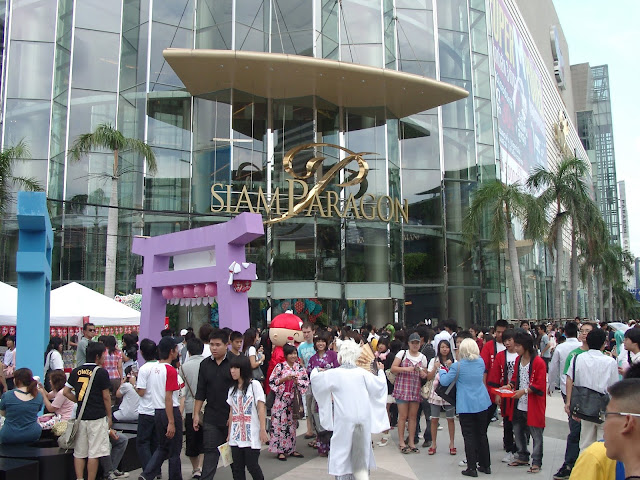 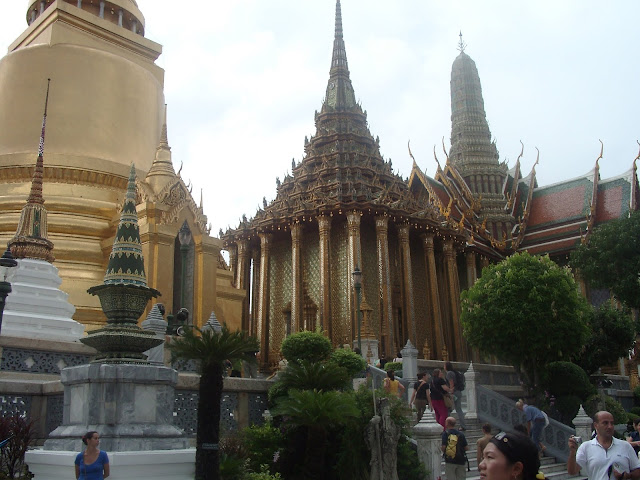 Email ThisBlogThis!Share to TwitterShare to FacebookShare to Pinterest
Labels: Bangkok

Right next to (North of) highway 2, and I drove past many times on the way to Korat, now finally time to stop and take some pictures.

Interesting parts are the Ubosot in unusual architectural style and a chedi with a spire that is inspired by Eiffel tower. 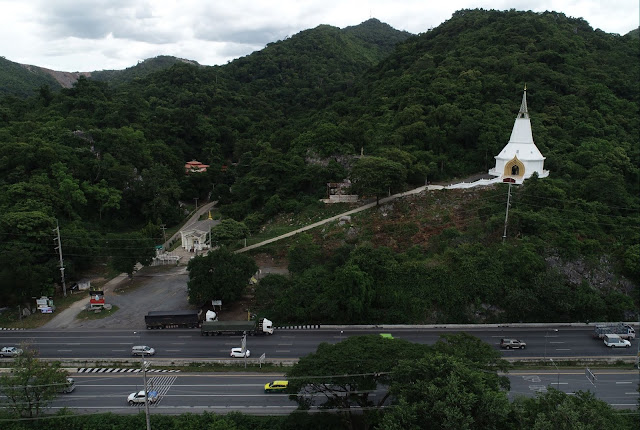 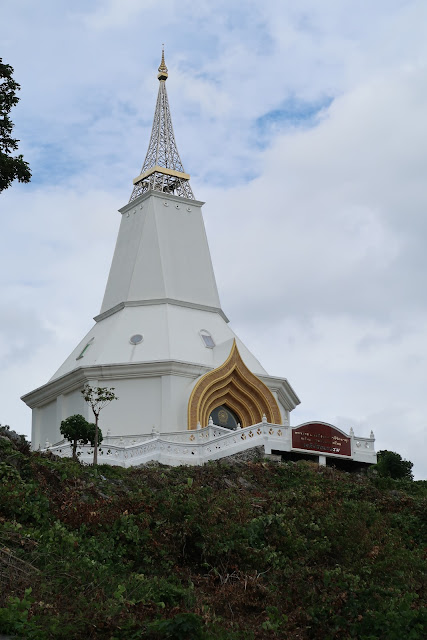 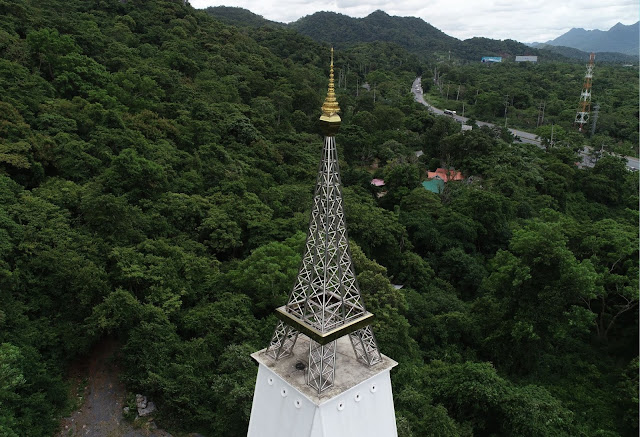 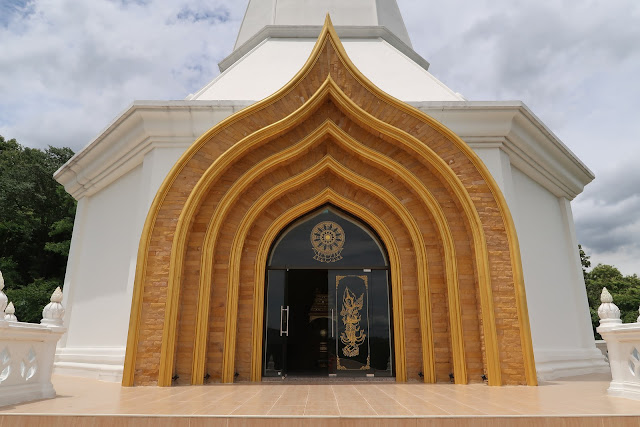 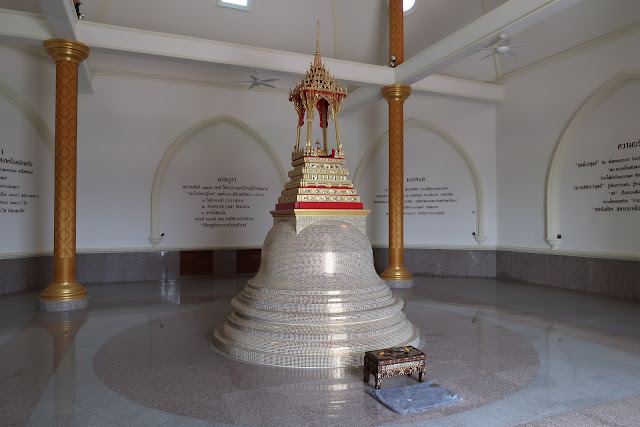 Ubosot  looks more like a Greek temple or a church: 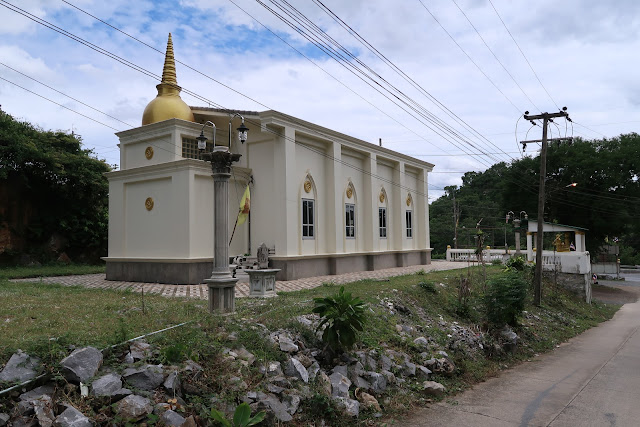 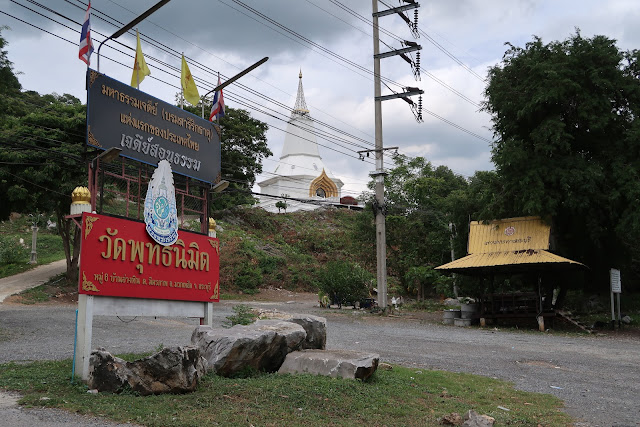 Thanks to a Farang friend for aerial pictures by drone.

There is another, more famous, Wat Phuttha Nimit in Kalasin.

This one I met in 2014 in Sunee Plaza in a beer bar and even went to see him in Buriram. But he became more and more mercenary, and finally lost his mind: 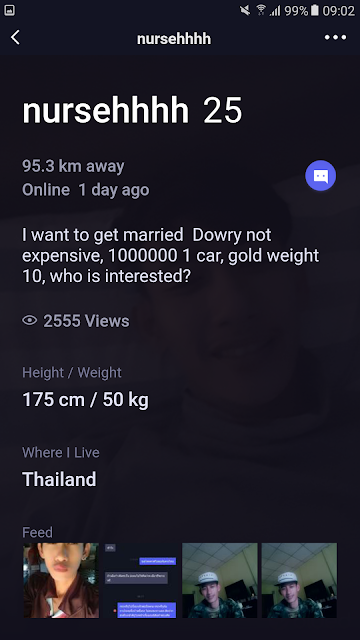 The muscle boy in Khon Kaen. After a promising first encounter 27dec2018 a no-show on 20feb2018 and telling me he is looking for boyfriend and not sex and disapproving of my lifestyle (meeting many boys). I mentally crossed him off my list, but then suddenly:

(Just ignore his last question. This is leading nowhere. I'm looking for free sex. I'm not a dating agency.)

Thu18jul2019 Berlin to Bangkok
Arrive at Suvrnabhumi airport. For first encounter I prefer someone whom I met before, who comes to my room. But none available.

Invite a boy Tee I had been chatting with on hornet for a while, and indeed he comes to my room (3 hours by bus, I could have done it in 1 hour; if his place in Ramkhamhaeng is at 3 o’clock and my place at 6 o’clock, he travelled counterclockwise).

No character flaws, not much activity in bed but cute face and nice body. Hope to see him again.

Fri19jul2019 gay bars and Sake disco
Tee stays over night and leaves 6:30. Give him 200 THB to cover his travel expenses.

Chill Out Boy closed without notice.
Superboyz and Sweet Banana open.
Have a look in Lucky Boys: promising!
Dreamboy Paradiso: few boys and none my type.
Dream Boy Bangkok open but no boys on stage.

Sake 00:24-03:27. Entry 160 THB includes mixers. A cute muscle boy walks around and clinks glasses with everyone. Show starts 01:15 with ladyboy lipsync. 11 Coyote boys in red underwear 01:49-02:13. Afterwards customers on stage. Ask the cute muscle boy “Where do you come from?” reply “I want money”. Clink glasses with a table with a cute boy, cute boy’s friend says to me “I’m looking for pay” pointing to whisky bottle. Leave 03:27, outside closed but inside still going.
.
Sat20jul2019
Slightly hangover. I have to put 100 Pipers on my blacklist, with Blend 285. Gin is okay.

Arrive in the afternoon and get boy Golf I had before from online. He is a bit into drama and missed out several encounters because I lost interest when he started to drama, but now straightforward: place, time, okay. Last time he made me love bites on my neck, I told him not to do so, but he does on my chest and back. Nonetheless, will see him again. 1000 well deserved. 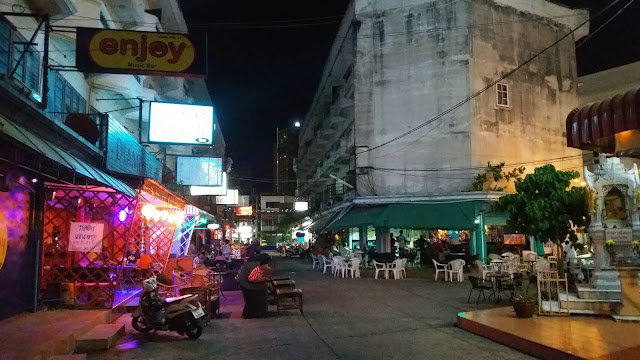 Krazy Dragon on the left; the bright sign is 789 Dragon (former Good Boys across the road) which had a few boys sitting whenever I passed. A Bomb open after renovation. Have a look inside: boys in trousers. Two show interest in me, and if their boys were in underwear I would order a drink, but in trousers: no sorry.

Kawaii closed permanently. A boy Nat used to work there, I had good time with him twice, but then he disappeared both physically and online. But I have a picture and will ask in other bars. (They don’t know him in Cupidol and Dream Boys, but I found him on gayromeo, he doesn’t work in bar at the moment. Too late to meet him this trip, but surely next time I go to Pattaya!) 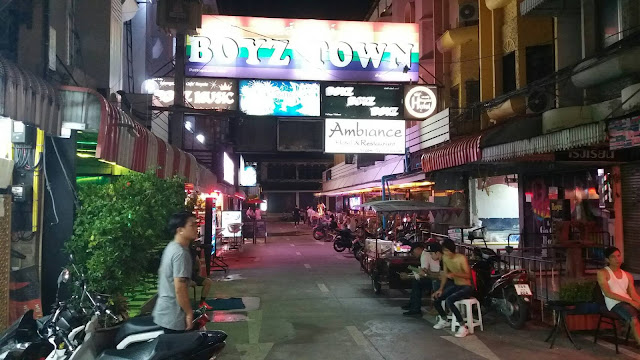 Paradise Spa, a new all male (as far as I could see) massage place, next former Happy Place bar (building still unoccupied).

Dream Boys 22:04-23:09. Pineapple juice 220 THB. 8 Boys and 4 customers; 8 customers during show. White individual underwear and closed shows. The boys all look very average and straight. Staff and customers smoking, and it gets annoying. Music too loud.

Show 22:23-58. Following acts: SM with chains and leather, nude dancing, candle, mankini, bathtub/foam/shower, soda, big cock with 9 boys. It seems they have external performers for the show. There was one slim cute (name Bank as far as I understood during the big cock show announcement, one small tattoo on leg and one small earring).

If he had been one of their regular boys, I probably would have invited him for a drink. But with external boys for show, I expect higher off fees and tip expectations, and if I invite him for a drink he might come fully dressed, so don’t bother.

They put some effort in the show, for me worth watching once per year.

Wed24jul2019 Pattaya
My all-time favorite comes in the afternoon. Once again a great time, 1000 well deserved.

Eros 22:03-28. Orange juice 100 THB. From 7 boys 2 customers to 2 customers. They open only at 9 pm, and close 1 am? The two customers have most boys sitting and drinking with them. Staff asks if I want one to sit with me, and even though there is no clear hit, I take James from Koh Samet. 150 boy drink and 100 tip. Body and face okay, ugly boxers, medium size cock doesn’t get hard. Keep in mind not to sit with him again.

Nice Boys 22:32-23:27. Hot tea 180 THB. From 12 boys 1 customer to 7 customers. New interior: seats and tables are covered in zebra pattern fabric. Boys in individual underwear and closed shoes. Several cute, I have had an eye on #15 for as long as he has been working there (several years), and today he is in lose trunks in light blue / dark blue print of marine life, e.g. big jellyfish, that I like.

How to distinguish gay boys from straight boys?
It seems that straight boys prefer to wear trunks or boxers, and gay boys briefs.
I have never seen a straight boy with a navel piercing.
Gay boys and straight boys have different taste in tattoos.
.
Thu25jul2019 Pattaya
A boy Arm comes in the morning. Last time we met was over a year ago. Little activity, but with that cute face, awesome body, nice cock, I can have him once a year without getting bored. 1000 well invested.

Pattaya to Bangkok by bus
Before the closure of van station at Victory Monument, I could get bus from my room to VM, van to South Pattaya (one change of transport, total about 110 THB). Now it’s all considerably more difficult and more expensive:

Van from South Pattaya to Mor Chit, but can get out at ARL Ladkrabang, then ARL and MRT home.

Sat27jul2019 Sakaew
Visit Bank in Sakaew again. As before, a bit boring in bed, but gorgeous body and cute face. Repeat. First time we had sex for free, but on all subsequent chat a lot of whining, so now I give him 500 THB every time we meet to assure everything goes smoothly.

Mon29jul2019 Bangkok
A boy Men who lives nearby and whom I met on 17dec2018 comes to my room. As then, type-wise so-so, but no character flaws other than talking too much.

Tue30jul2019 Bangkok
Another boy from nearby Ben whom I saw online a few times comes to my room. Not as cute as on picture, a bit on the fat side; but brown skin, no body hair, no character flaws, good English.

Wed31jul2019 Nonthaburi
A boy Jo from Myanmar added me on Line, and I don’t know how he got my Line! He looks cute and is gay and wants to meet. Pick him up at MRT Lumpini, have dinner, then to my room. Activities in bed good, but on the fat side and too much body hair, no repeat.

Afterwards points out that he has no job, stays at a friend’s place, no money for food, so I give him 500 THB. After some whining increase to 1000.

At night take MRT (blue and purple) to Central Plaza Westgate to meet Art again. He finishes work midnight and then comes to my room. A bit late, but good activities in bed, worth a repeat.

ChristianPFC
Blog about work and live in Thailand. No PC, no bullshit.